Aiming for a standardized, high-quality, royalty-free video codec to remove friction for video over the Internet

The NETVC working group aims to create a video codec that can be used in open-source software, in addition to proprietary software and hardware encoders. 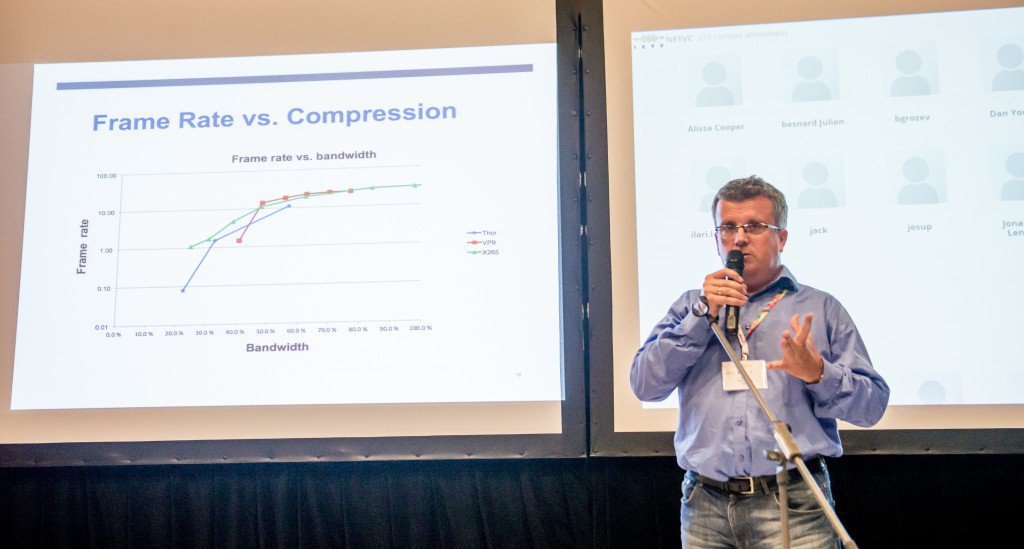 The NETVC working group aims to create a video codec that can be used in open-source software, in addition to proprietary software and hardware encoders. Historically, most open-source software has been unable to make use of royalty-bearing codecs, for two key reasons: first, having to pay royalties at all on a product that yields no revenue is fiscally unsustainable. This is further complicated by the fact that the broad, uncontrolled distribution of open-source software makes accounting for per-unit costs impossible.

Beyond use in open-source software, the availability of a standardized, high-quality, royalty-free video codec is expected to remove friction from the market for applications and devices that transmit video over the Internet. This has an overall beneficial effect on Internet users.

In 2012, the IETF’s CODEC working group published the specification for what is arguably the best audio codec today, Opus, with a similar set of goals. Opus has seen fairly broad adoption on the Internet, due to its high quality and royalty-free licensing status. NETVC seeks to replicate that success for video codecs.

Last month, Cisco contributed its Thor video codec to the NETVC effort, which joins Mozilla’s Daala codec as input to our work. I’m excited that Cisco has come forth with an additional pool of techniques to draw from, and working group participants wasted no time in trying to figure out how to combine them into a best-of-breed codec. At a weekend “hackathon” before the IETF meeting in Prague, a group of NETVC participants collaborated to perform preliminary merging of some specific, easily-isolated techniques from both codecs together, with promising results.

Almost as important as its actual implementation, Thor comes to the IETF with a pool of IPR that Cisco has declared as being available on royalty-free terms. This opens up many avenues of technical progress that would have otherwise been unavailable to NETVC.

Finally, I’d like to quantify where the quality of NETVC’s eventual output stands as compared with H.264 and HEVC (also known as H.265, the successor codec to H.264). The working group has a stated goal to have “comparable or better performance” when compared with codecs in widespread use. I’ll start this quantification by emphasizing that the NETVC working group had its first meeting last month, and that the input codecs are still subjects of considerable research.

With that caveat, the results achieved by the Daala team have been objectively better (using industry-standard quality metrics) than H.264 since approximately mid-February. Early testing by NETVC participants shows that Thor is also somewhat better than H.264 already. By merging the techniques used by both codecs and applying further refinements, we expect the codec produced by NETVC to surpass the performance of HEVC.

I’ll note that this doesn’t mean that NETVC’s task is largely complete. There’s still considerable work to be done in combining the best aspects of Thor and Daala into a unified codec (along with any other techniques that are brought to the IETF by interested parties), as well as developing runtime efficiency improvements that will allow using the codec to compress media in real-time on normal consumer devices.